Adina is the founder of Stanford’s Resilience Project. She has worked with highly accomplished and ambitious students for years to help them learn, adapt, and excel. Some children are back home as colleges and dorms are closed, and others are in lockdowns elsewhere. For the first time, parents and children could be a potential threat to one another in a way that has never been experienced before. They struggle to find space and navigate their dynamic while being confined behind closed doors.

Adina brings a positive light to this heavy conversation by inviting us to slow down and reminds us that everyone is impacted by these unforeseeable circumstances (not only you). Therefore you cannot possibly fall behind by being patient and just focusing to take care of yourself. She warns that with the current level of anxiety and rich resources that are out there one might feel pressured and confused. To untangle this confusion, she recommends that we look into resources that offer us validation of how we feel and where we want to be at this moment in time. She frees us from the misconception of seeking resilience while you are still in the midst of the crisis, and offers reassurance that it will come when the time is right.

Adina Glickman, MA. is a Certified Integral Coach who has helped thousands of students at large research universities, community and state colleges, and small liberal arts schools, achieve their academic and personal goals through her Resilient Learner coaching model.

During her 18 years at Stanford University, she founded The Stanford Resilience Project and created The Duck Stops Here, an academic skills blog for Stanford students that is open to the public. She co-founded The Academic Resilience Consortium, an international collective of faculty and higher education professionals from 250+ schools in sixteen countries. Adina is the author of The Resilient Learner: Eight Pillars of Student Success (in press), and is the co-author of “Over the Influence: A Harm Reduction Guide to Managing Drugs and Alcohol” (Guilford, 2003).

Adina received her BA in Music from Reed College and her Master’s degree in Social Work from New York University and worked in community mental health for ten years before moving into educational consulting and coaching.

In this dialogue, Julia and I talk openly about the shock of our current circumstances in the face of the COVID-19 pandemic. Living losses that people are experiencing in relation to the pandemic and relative to pre and post occurrence includes strains on jobs, finances, personal freedom, mind-space, relative certainty, our partners as we knew them and so on. We acknowledge that while we are all enduring changes in our daily lives, everyone’s experience of it is different and equally valid. Julia invites us to be kind to ourselves and take it one day at the time. Julia also shares parts of Niebuhr’s serenity prayer “Accept with serenity the things that cannot be changed, Courage to change the things which should be changed, and the Wisdom to distinguish the one from the other”. Listen to our dialogue for more.

Julia was Psychotherapist for Paediatrics at St Mary’s Hospital Paddington, the post she established in 1992, where her role for 25 years involved seeing families who have children or babies who die, and where she trained and supported the staff.

In 1994 she worked to help launch and establish The Child Bereavement UK and as the The Founder Patron was involved and in many aspects of the charities work, having a key role in fundraising, strategy and training. She has stepped back from active involvement now.

In 2016 Julia was awarded an MBE in recognition of her services to bereaved children and in 2017 Middlesex University awarded her an Honorary Doctorate.

In 2017 Julia published Grief Works which was a bestseller in the UK and has been published in 17 countries. In March 2020 she published This Too Shall Pass: stories of Change Crisis and Hopeful Beginnings and is a Sunday Times bestseller.

She also has a private practice where she sees families and individuals for many different issues. 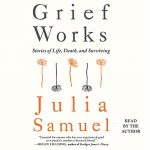 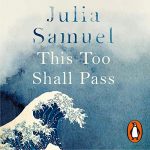 –This Too Shall Pass: Stories of Change, Crisis and Hopeful Beginnings by Julia Samuel 2020.

The Little Black Fish is an Iranian children’s book by Samad Behrangi. In the story, the little black fish just knew there was a whole world beyond her own pond. This curiosity and sense of wonder made her leave the pond and everyone she knew and loved. She traveled the river and made it to the vast ocean, gaining friends and wisdom along the way.

My parents nicknamed me “the little black fish” because I had endless questions and curiosity. I still do! This blog captures that inquiring spirit and I invite you to explore with me.